on December 24, the top 100 private enterprises in Inner Mongolia were released by the Federation of industry and Commerce of Inner Mongolia Autonomous Region. The top 100 enterprises on the list cover food, manufacturing, energy, chemical industry, agriculture and animal husbandry and other industries. The list is ranked according to enterprise operating income, Among them, Youran animal husbandry rose to No. 9 in the list with a total operating revenue of 12.73 billion yuan (in accordance with China's accounting standards for business enterprises), an increase of 4 over 2020. 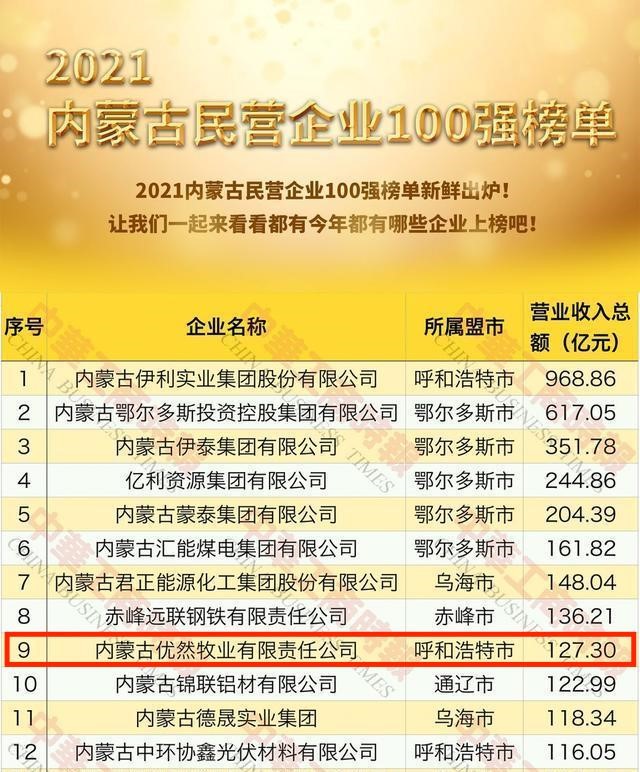 Hu dagula, member of the Standing Committee of the Party committee and Minister of the United Front Work of Inner Mongolia Autonomous Region, attended the press conference and delivered a speech. Liang Shuqin, deputy director of the United Front Work Department of the Party committee of the autonomous region, presided over the meeting. More than 400 leaders from the development and Reform Commission of the autonomous region, the Bureau of statistics, the Department of industry and information technology, the Hohhot central sub branch of the people's Bank of China, the heads of the top 100 private enterprises in Inner Mongolia and the heads of all league and municipal federations of industry and commerce attended the press conference.

as the world's largest supplier of raw milk, Youran animal husbandry business completely covers the whole upstream dairy industry chain from breeding to feed and then to raw milk production. Various businesses cooperate with each other, forming a business closed loop of \